1. Give us a background of how you got into coaching XC and/or Track & Field.

I played a lot of sports growing up, I ran the hurdles and threw the discus in high school (not very well I might add), but it wasn't until late in my first year and into my second year of coaching that I fell in love with Track and Field.  I was coaching at Magnolia and we were fortunate to have some good athletes and a very good coaching staff along with a great setup for track and field.  The kids were set up for success and we won quite a bit so it got to be a lot of fun.

I had a couple of years experience in XC prior to coming to Cabot, but it was at Cabot where I learned the most from Coach Leon White about XC. I had the honor and pleasure of coaching with and learning under Coach White for 8 years.

2. What inspires you to continue coaching the sport?

I am constantly inspired by the athletes and their goals to become a better athlete.  All athletes are unique in their physical and mental makeup and I really enjoy the challenges they each present. The sports of track and field and xc present many challenges and barriers that make it very rewarding to see kids push themselves to break down those walls, especially in a team setting when most think we coach and compete at an individual sport.

3. Give us a memory that has stuck with you through the years.

The first time we won a state championship in track and field at Magnolia.  It was very cool and a little overwhelming.  I'll never forget the feeling of accomplishment for those kids and my fellow coaches when that happened.

4. What differences have you seen in the program since you've been HC?

I have been a head coach at two different stops in my career.  Both jobs were very different in many ways.  At both places, I have implemented strategies and programs that have allowed us to be more successful than ever.

At Cabot, we have started student led group training in the summer time for our XC teams, started an end of the year awards dinner for both track and xc, started summer weights with our track off season kids, we actually won the first ever Leon White Invitational Meet (our Sr High home meet at Cabot formerly known as the Walmart Invitational) in both the girls and boys divisions in the same year.  This is something that hadn't been done in over 20 years.

5. What's your take on the direction of High School XC and/or Track & Field in Arkansas?

Track and field is the most participated sport in our country as far as the number of schools and athletes are concerned.  However, track in Arkansas has been fighting an uphill battle recently for various reasons.  I do think we are in an upward trend as far as interest, success of our teams, and the higher level that our athletes are competing at.  It shows when we have many senior track athletes who go on to college and continue to compete at a high level nationally.

We just must continue to promote and encourage our schools and our athletes to keep setting the bar higher and higher.

If you can also share with me any career highlights such as: 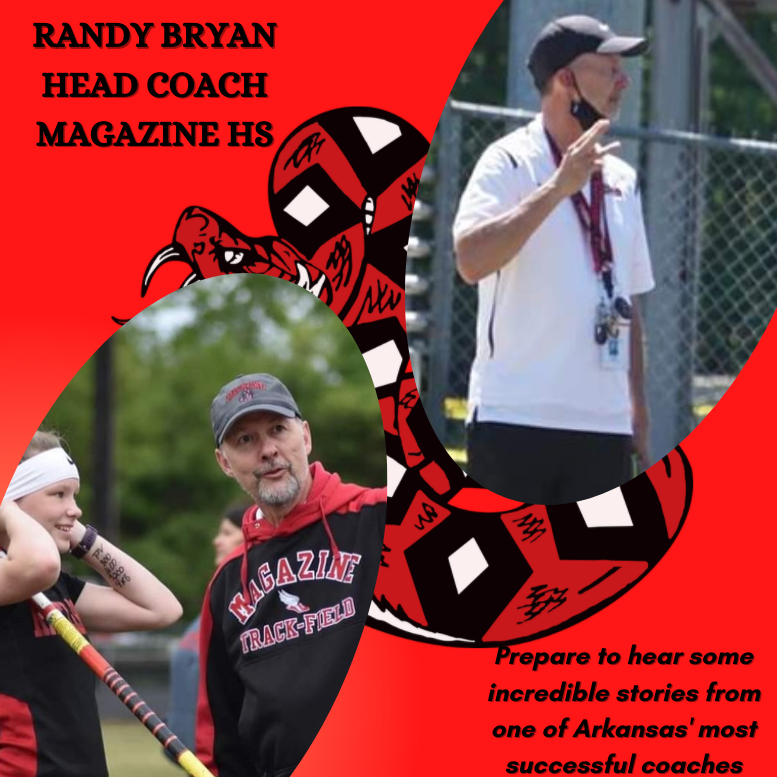 1. Give us a background of how you got into coaching XC and/or Track & Field.

Just understand that I am a storyteller, so crop this however you need to make it fit.  I participated in multiple sports throughout high school in the 70s and 80s but track was secondary to basketball for me at that time. I thoroughly enjoyed it as a sprinter/jumper (especially sprint relays with my brother and two best friends) but it was in college that I fell in love with the sport. My advisor was Coach Don Dempsey and he suggested that I take coaching theory for more than one sport to make myself more flexible when interviewing for jobs. My classes for track and field were so enjoyable. Every person in class had to participate in each event to better learn proper technique plus we competed in a somewhat decathlon style scoring for the events. That provided me with a healthy respect for the work required to be proficient in each event.  As part of these classes, we got to see the NAIA National Championship meets at Arkansas Tech University in back-to-back years.  Wow!  I was sold.  Seeing those athletes just elevated my love for the sport.

When I accepted the coaching position for basketball at Magazine, the track and field was assigned to me. In year one we finished last. Over the next 7 years we finished as District Runner Up 6 times and 3rd place once.  We finally broke through in 97 and have won District 15 times in the last 21 years.  That leads me to the cross country portion of the answer.  In the late 90s, my fire to succeed was fueled by so many runner up finishes. I was attending clinics and Coach McDonnell would talk so much about distance runners so in 98 I began the cross country program at Magazine. It took us until 2002 to win a District title and we have won 17 more since then. Those distance runners have been one of the key ingredients to our District and State Championships over the years.

2. What inspires you to continue coaching the sport?

Multiple things inspire me to continue.  Working with kids, impacting kids, those kids coming back as adults or communicating with me years later to share their lives with me, seeing an athlete go from point A to point Z in 6 years with me, and so many more. I would be lying if I didn't say that I also enjoy the challenges and the success. I believe ABC Wide World of Sports used to mention the thrill of victory and the agony of defeat. My fire still burns white hot. But the kids are the reason.

3. Give us a memory that has stuck with you through the years.

My first state champion to coach was Jeremy Wortham in high jump back in 1993. My daughter Courtney was just a baby but we took her to meets every year including that one in Eureka Springs. I even held her in my arms working meets when she was really young. Well, track and field is very big in my family. Courtney just took to it. She won so many medals and ribbons all through the elementary years. She earned All-Conference honors all six years in junior high and senior high setting district and school records along the way. However, the highlight for me was her senior year. Courtney was the only girl on the senior high team as a freshman and again as a sophomore. She had qualified for state three straight years and scored in discus twice going into her senior year. She told me she was going to win it that year. She lifted, trained daily all year long. She would throw during the athletics period.  She would take 25 to 50 throws at home daily as well. Each day ended with the words, “Just one more…”. She entered state ranked #3. My best male thrower kept telling me for weeks that Courtney was going to win it, that her technique was perfect and her consistency was unmatched. Truer words were never spoken. On that cool morning at Ft. Smith Southside, we got to celebrate as Courtney became Magazine’s first recorded female state champion. She also led our team to the first district title for any Lady Rattler team in track and field and a fourth place finish at state. Truly great moments for any father getting to coach their daughter.

4. What differences have you seen in the program since you've been HC?

A.  Numbers.  We averaged 7 kids a year in those early years and very few girls at all over the first 20 years.

C.  Equipment.   Various schools from Danville to Booneville, to El Dorado to Dardanelle have donated or sold us equipment over the years. We had none before 2003.

D.  Culture for winning.   When the kids come back and visit, one thing many of them mention is that they expected to win. Such was not the case in those early years.

E.  Community.  We are a very small rural community and track and field/cross country were almost cult sports and unknown to our folks for the first 7 or 8 years. Now everyone in our community knows about it and has expectations.

5. What's your take on the direction of High School XC and/or Track & Field in Arkansas?

I believe cross country has grown tremendously and continues to grow. When I started, it was difficult to find any meets within 2 hours of Magazine. Now, we have meets in nearly every surrounding community plus multiple homes meets a year.   Track and Field goes up and down from year to year.  I understand but don't like that we have such a short season and end while it is still cooler weather*.  We don't have time to truly develop some of our kids who are multiple sport athletes (I am not a believer in specialization, especially not until senior year.).  I wish we still had an indoor season where we went to Fayetteville, to Searcy, to Fayetteville, to Searcy, and then State at Fayetteville with a possible invite to Jonesboro from year to year.  Covid did some damage but I am hopeful that the Olympics will put us back to where we were before Covid hit.

Thank You to Our Sponsors